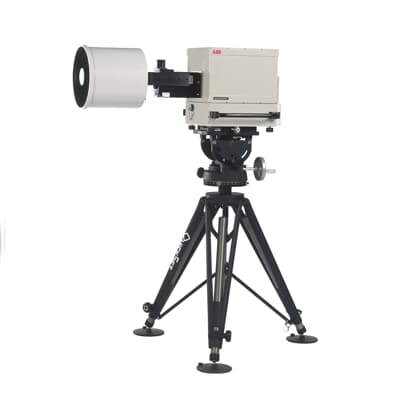 The MR Series are the leading field infrared spectroradiometers both in terms of performance and reliability, with undisputed market dominance since its introduction in 1989 (more than 150 systems installed worldwide). The MR Series of spectroradiometers have earned a high reputation based on exceptionally high spectral resolution and radiometric reproducibility, wavelength accuracy, and sensitivity.

The performance superiority of the FTIR technology combined with the high radiometric accuracy made the MR series became the preferred FTIR spectroradiometer. As some of our clients said, they choose the ABB MR Series because it is the instrument of choice capable of providing spectral measurements precision within their expectations. In particular, the high resolution provides narrow spectral structure in the infrared radiation domain highly critical to military characterization needs.The MR spectroradiometers series were adopted by several defense research organizations around the world (in operation in more than 20 countries).

For smooth and efficient field trials or measurement campaigns, equipment reliability and confidence in instrument performance is mandatory. Robustness and durability differentiate the MR series spectroradiometers from other commercial FTIR spectroradiometers. The rotary scanning mechanism uses frictionless flex-pivots and corner-cube-retroreflectors. The interferometer design has been proven with more than 3600 units produced and over 400 billion of scan cycles successfully  achieved. The permanently aligned interferometer (patented rotary scanning mechanism) shows both outstanding stability of radiometric response and high reliability. Since it is balanced with respect to its center of rotation, the MR interferometer can be operated in any orientation (useful for airborne operation).